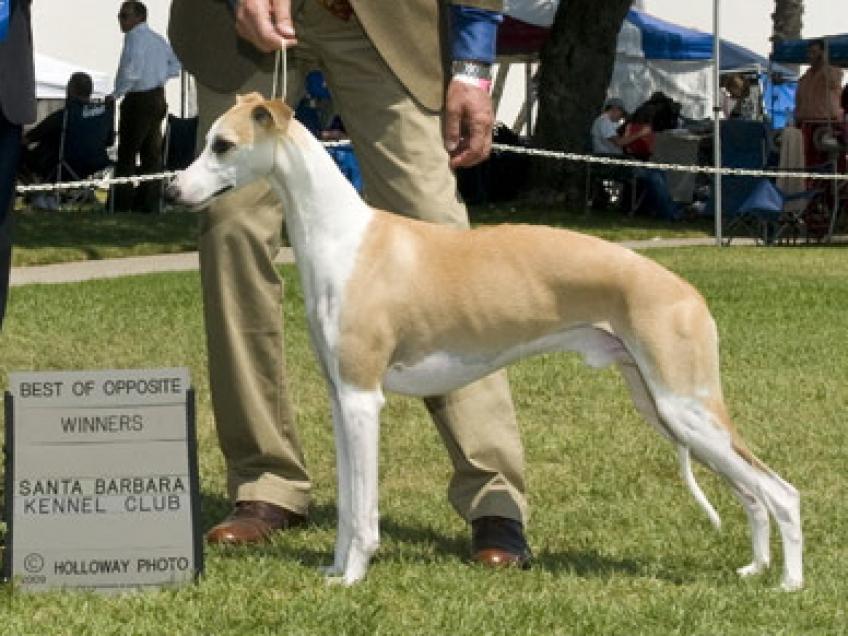 Dandy is by the most spectaclar american bloodlines : Bohem and Starline.  It was in 2007 I got a message from Bo Bengtson that a Russian person was looking for a whippet : Marina Slepneva.
Marina had seen our Timmy, Multi Ch Bohem Time Flies WW06, in Poznan the year before.  She was there with her first whippet Fly.  She felt in love with Timmy....  When the puppies were born, I contacted her.  She was intrested in a puppy male.   She came over to our home a took Dandy with her to Saint Petersburg in Russia.  As Marina wasn't handling her whippets herself, I asked her to learn.  Which she did in perfection. Dandy won a lot of shows, in Russia, in the Nordic lands, and all over Europe.  During the Worldshow in Sweden in 2008, he became Vice Youth Winner.  In 2009, Bo Bengtson invited Dandy and Marina to come over to California.  He gained his AKC Chamion titel in style. He continued his showcarreer in Europe.  It was in 2014 he stepped in his sire's foodprints : he became World Winner 2014 Helsinki.
I am very proud of Dandy and all his achievements, thanks to his owner Marina Slepneva.

At stud for suitable bitches.